You start out your day with a nice cup of coffee, and think, "Ah, greenfield project day...smooth sailing".  You fire up Visual Studio and create a new C# project.  "First things first, I need library X." you say.  "Wait, what the?" 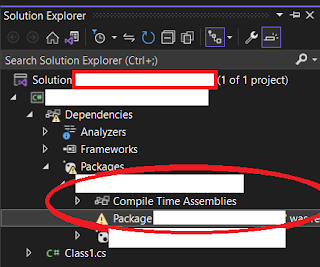 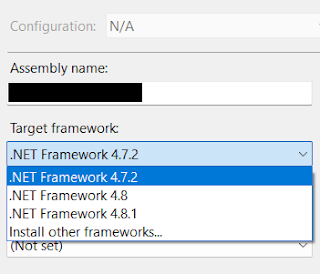 "Ok, what about my new project?  Just as a test, does the warning go away if I set it to an older .NET Framework?  Wait, where are the .NET Framework versions?" 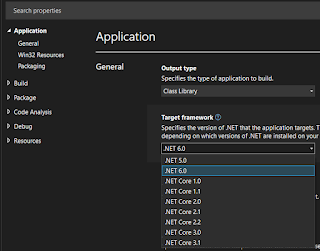 What is going on here?!? Well, if you're new to .NET (or your coffee hasn't kicked in yet), you may not remember that a few years back, with the introduction of Visual Studio 2017, Microsoft revamped project files (.csproj).  In this case, the library project is using the older style, which supports only .NET Framework.  The new project is using the newer .csproj style, which supports .NET Core & .NET 5/6.  Backwards compatibility isn't great, though there is now a tool for converting old projects.

But, here's the kicker.  Finding this issue may not be quite that easy.  If you miss the warning in Solution Explorer, the project will still compile.  In my case, it was a test project, and I had no issues until I got this at runtime:

System.IO.FileNotFoundException : Could not load file or assembly 'System.Windows.Forms, Version=4.0.0.0, Culture=neutral, PublicKeyToken=b77a5c561934e089'. The system cannot find the file specified.
TearDown : System.InvalidOperationException : The host address has not been set.

The library had the dependency on System.Windows.Forms, but it couldn't find it due to the aforementioned warning.  Legacy code is difficult to shake.

One other tidbit on old projects: If trying to run nuget pack on a legacy project file, you could get an error like this:

In my case, I had to download a very old version of the NuGet executable (v3.4.4) to get it to run.

Popular posts from this blog

- October 25, 2020
I've been implementing Conan as our C++ package manager, and I had the following issue cause me a fair amount of grief over the last couple days: [MyPackageName] is locked by another concurrent conan process, wait... If not the case, quit, and do 'conan remove --locks'  You would be forgiven for thinking conan remove --locks should do the trick, but alas, it does not.  After finding hints on several Conan Github issues, I finally figured out that manually removing the package folders in one or both of the following places will alleviate the issue: Windows : C:\Users\username\.conan\data\packagename WSL/Linux : /home/username/.conan/data/packagename
Read more

Making a standard ASP.NET listbox do multiselect without holding Ctrl

- November 02, 2010
I've always hated that users of a standard ASP.NET listbox control must hold ctrl to select multiple items. It's just a recipe for bad/incomplete data input. So, I set out to see if I could make the listbox do multiselect without holding the ctrl key. I know that there are third party controls out there that accomplish this more elegantly, but I wanted to see if it was possible with a standard control. I managed to get it going with some javascript help. First, I defined my listbox & gave it an onclick event to fire a javascript method: Second, I created the javascript method (the last one below) to loop through the listbox elements, select all of the items previously selected, and toggle the one the user clicked. //This array holds the "selected" state of each listbox item var selectedClientPermissions = []; //Because I'm working with a databound listbox, I grab the selected values //on page load & put them in the array. function pageLoad() {
Read more

- February 28, 2011
As with most developers using Wonderware products, I often have to get creative to compensate for the limitations in the development platform, scripting language, etc. Lately, I've been need to create "objects" (in the object oriented programming sense of the word, not the app server sense). That is I need collections of data describing some real world thing. For example, I have been creating a callout feature for a client's SCADA host system. The callouts are stored in a SQL database and my scripts pull out a whole set at a time. Each callout has various attributes such as the callout type, the comparison operator (>, <, =, >=, <=), the setpoint, etc. This presents two issues. First, how do I keep all of these pieces of information together for each callout without creating & deploying App Server objects for each one. Second, at any given time, there will be a variable number of callouts. I have used the following method (read complete hack
Read more

Joe Schrag
I am a Software Developer who believes software should be about more than money & cool tech; it can be a tremendous tool for good. I strive to write software which has a positive social and/or environmental impact. Of a like mind? Shoot me a note on LinkedIn. I would love to make your acquantance.